Swiss computer vision startup Advertima has raised a €15 million Series A (~$17.5 million) to build out a machine learning platform for physical retail stores to ‘upgrade’ the shopping experience via real-time shopper behavior analytics. The round is led by existing shareholder, Fortimo Group, a Swiss real estate company.

Fed by visual sensors, Advertima’s platform provides physical retail spaces with a real-time view of what’s going on in store — comprised of AI-powered behavioral and demographic analysis, as shoppers move through the space — with the aim of helping retailers better understand and respond dynamically to customers in store.

The startup calls this its “Human Data Layer” — noting that the tech can support features like smart inventory management and autonomous checkout.

Throw in digital signage (which it also offers) and its platform can be used to serve contextually relevant messaging intended for one or just a few pairs of nearby eyeballs — such as product offers for a particular gender or age bracket, or discounts for families — depending on who’s in proximity of the given digital eye.

Albeit ‘relevancy’ depends upon the calibre of the AI and the quality of the underlying training data. So certainly isn’t a given. Ads that seem to personally address you when you make eye contact, meanwhile, have been a sci-fi staple for years, of course. But the reality of ‘smart’ ads informed by AI analytics could very quickly stray into creepy territory.

An example message shown in a demo video on Advertima’s website isn’t great in this regard — as the system is shown IDing a stick woman and popping up a targeted message that reads: “Hello young woman. All alone?” (uhhh 😬). So retailers plugging such stuff into their stores need to be hyper sensitive to tone and context (and indeed take a robust approach to assessing how accurate the AI is, or isn’t).

Or, well, they could find shoppers fleeing in horror. (tl;dr no one likes to feel watched while they’re shopping. And if the AI misgenders a potential customer that could be a disaster.)

One flashy pledge from Advertima is that its approach to applying AI to guestimate who’s in the shop and what they’re doing is ‘privacy safe’ — with the startup noting there’s no facial recognition nor biometric detection involved in its system, for one thing.

It also specifies that the visual sensors required for the analytics to function do not store any image or video recordings. Instead it claims to “only process minimal anonymized data” — and only evaluate that in “aggregated form”.

“This means that the unintentional identification of a person is technically impossible,” is the top-line claim.

With long-standing data protection laws covering Europe, and EU lawmakers actively considering new rules to wrap around certain applications of artificial intelligence, there’s a legal incentive not to push such tech’s intrusiveness too far (at least for local use-cases). While Switzerland, which is not a Member of the EU (though it is part of the bloc’s single market), also has a reputation for strict domestic privacy laws — so this homegrown startup’s pitch at least reflects that context.

That said, its system appears to generate a “Person ID” (see below screengrab) — so we’ve asked how long it retains these individual-linked IDs for; and whether or not it links (or enables the linking of) the Person ID with any other data that might be gathered from the shopper, such as an email or a device ID. If the Person IDs are persistent it could enable a retailer to re-identify an individual via the Advertima visually tracked behavioral data — and then be in a position to plug these offline shopping behavior ‘insights’ into an identity-linked customer database or link it to an ad profile that’s maintained by a tracking giant or data broker for ad targeting purposes. All of which would be the opposite of ‘privacy safe’ — so we do have questions. We’ll update this report with any response from Advertima to this.

Update: The company says the reference to a ‘Person ID’ is from an old version of the software which it only used to demo the platform’s capabilities, such as at trade fairs. 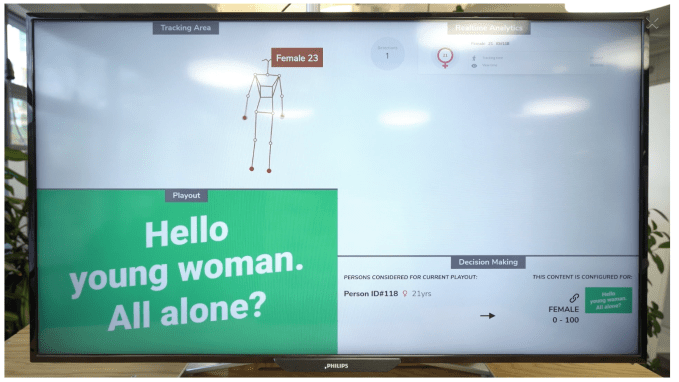 “We do not link tracking IDs to any other data like device IDs or other attributes from external sources,” it added. “Our system is not designed to and not capable of communicating with other devices like mobile phones. We operate with computer vision only with data privacy in mind to ensure that we deliver a positive experience. From the very beginning, we designed our solution in collaboration with data privacy officials to ensure that we are fully compliant with EU and Swiss data privacy laws, some of the most restrictive data privacy laws in the world.”

For its cashierless check-out product, Advertima’s system tracks customers around the store and may communicate the ID to a retailers’ POS in order to generate the bill. But in that scenario the customer has to have opted in. “In [the case of cashierless checkouts], the anonymous tracking ID and basket are communicated to the retailer’s checkout system. In the retailer’s system, it is linked to their customer ID to process the checkout. Of course, this requires a double opt-in by their customer, which the retailer implements,” it said.

Advertima was founded back in 2016 and has so far forged partnerships with Switzerland’s largest retailer, Migros and the international grocer SPAR, to deploy its tech. It says the system is being used by 14 companies across eight countries at this stage.

It says the new funding will go on further developing its platform, and on scaling so the business can better address the global market for smart retail solutions. Although it’s competing in a space that includes Amazon’s cashierless tech so that’s one Goliath-sized big tech competitor to Advertima’s David.

In a press release announcing the Series A it notes it will be ploughing in €10M of its own revenue too — so touts a total spend of €25M over the next two years on building out its platform.

“We see a world where the physical and digital layers are merged to enhance our daily professional and private lives,” said Advertima Co-Founder and CEO, Iman Nahvi, commenting in a statement.

In a blog post announcing the Series A, he also talked up the autonomous store product — suggesting it will “change how people experience grocery shopping, cinemas, DIY stores, and a whole range of retailers”.

“Delivering smart inventory management, autonomous checkout, in-store analytics, and contextual content on smart digital screens will allow grocers and other retailers to maximize the efficiency of their stores, increase their revenues, and generate greater returns per square meter,” he wrote.

“Retailers can actualize an omnichannel strategy to orchestrate better experiences and relationships with their audience. Soon the standard for retailers will be holistically customer-centric: Cashierless checkouts, no lines, individualized experiences, and real-time product recognition for fast, easy, and fun shopping.”

Given that Amazon began licensing its ‘Just Walk Out’ cashierless tech to other retailers earlier this year, and various tech startups have sprung up to chase the potential of similar systems — such as AiFi, Grabango, Standard Cognition and Zippin — Advertima’s global growth ambitions are tempered by plenty of competition.

Physical retail has also taken a battering from the coronavirus pandemic. Although COVID-19 may, paradoxically, drive demand for cashierless tech — as a way to reduce the risk of viral exposure for staff and shoppers.

AI technology being applied to eliminate retail jobs does raise wider socioeconomic questions too, though.

Also commenting in a supporting statement, Fortimo Group founder Remo Bienz added: “It is clear that the rapid digitalisation of our society is going to have an impact on consumer habits, especially in the retail sector. Advertima is at the cutting-edge of technology in the retail space. As a long-standing shareholder, we know how visionary their technology is, but also how it has been successfully adopted by major, global organisations and already generated significant revenues. We’re excited to be part of Advertima’s journey.”