After launching a number of new developer tools for Alexa last week, Amazon today is introducing an updated version of its Alexa mobile app for consumers. The new app aims to offer a more personalized experience, particularly on users’ home screens, and offers more instructions on how and when consumers can use the digital assistant, among other changes. Notably, the app has moved its third-party skill suggestions off the main screen, to increase focus on how consumers are actually using Alexa.

The redesign offers an updated home screen, with a big Alexa button now at the top informing users they can either tap or say “Alexa” to get started. 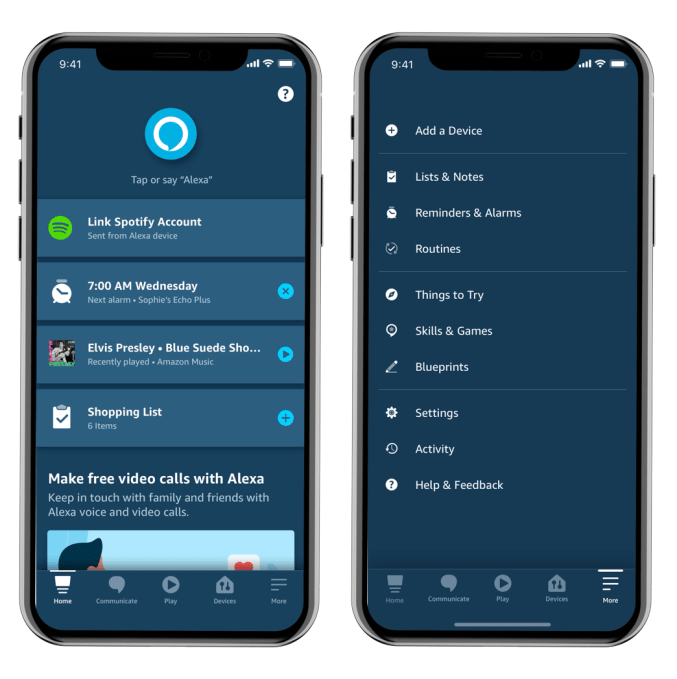 This is followed by a list of personalized suggestions based on what consumers’ usage of the app indicates is important to them — whether that’s reminders, a recently played item like their music or an Audible book, access to their shopping list and so on.

Users may also see controls for features that are frequently accessed or currently active, like the volume level for their Echo devices, so they can pick up where they left off, Amazon says. It’s worth noting that these Echo devices could include Echo Buds, Amazon’s Alexa-powered wireless earbuds, which could be key to its plans of enabling Alexa’s newly announced capabilities for controlling mobile apps.

For first-time users, the Alexa app will offer more tips on what to do on mobile. For instance, new users may see suggestions about playing songs with Amazon Music or prompts to manage their Alexa Shopping List.

Meanwhile, the app’s advanced features — like Reminders, Routines, Skills and Settings — have been relocated under the “More” button as part of the redesign.

The changes don’t necessarily mean Amazon has decluttered the Alexa home screen, however.

Because the update moved the Alexa button to the top of the screen, it has left room in the navigation bar for a new button: “Play,” which encourages media playback.

Before, the app had featured the date and weather at the top of the screen — an indication that Amazon had hoped the app would be something of a daily dashboard. (See below). Now, the company seems to understand that users will launch the app when they want to do something Alexa-specific. That’s why it’s making it easier to get to recent actions, so they can effectively pick up where they left off on whatever they were doing on their Echo smart speaker, for example.

In addition, the new app notably deprioritizes Alexa’s third-party voice apps (aka “skills”), which have not yet evolved into an app ecosystem to rival its mobile counterparts, like the Apple App Store for iOS apps or Google Play. Studies have indicated a large number of Alexa skills weren’t being used, and as a result, the pace of new skills releases has slowed.

Instead of showcasing popular skills on the home screen, as before, the app’s “Skills & Games” section has been shuffled off to the “More” tab. Amazon’s first-party experiences, like shopping, media playback and communications, now take up this crucial home screen real estate.

Amazon says the new app is rolling out worldwide over the month ahead on iOS, Android and Fire OS devices. By late August, all users should be migrated to the new experience.