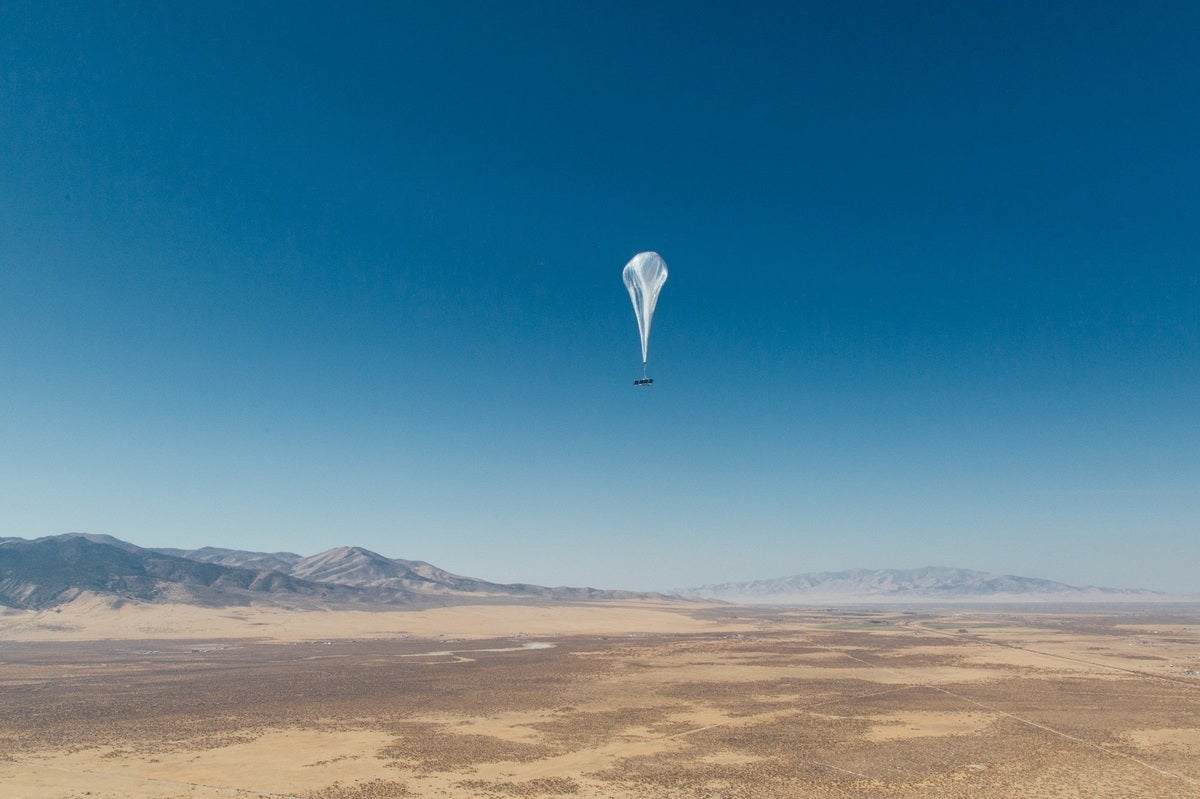 ISP Telkom Kenya is launching the first commercially available 4G LTE service using balloons that act as a network of cell towers floating in the stratosphere.

The service will initially cover approximately 19,000 square miles in Kenya, according to Alastair Westgarth, CEO of Loon, a spinout of Alphabet and the underlying technology provider. Roughly 35 or more balloons will comprise the fleet, moving continually, drifting in the stratosphere about 12 miles above the surface of the earth, Westgarth said in an article on Medium. “We refer to Loon as a floating network of cell towers,” Westgarth said.

Kenya is underserved by traditional internet, which is why this delivery mechanism is appropriate, said Mugo Kibati, Telkom Kenya’s CEO, in a press release. “… the Internet-enabled balloons will be able to offer connectivity to the many Kenyans who live in remote regions that are underserved or totally unserved, and as such remain disadvantaged,” Kibati said. Telemedicine and online education are two expected use-cases.

In testing, Loon achieved a downlink speed of 18.9 Mbps with 19 milliseconds latency and an uplink speed of 4.74Mbps. Westgarth said the service is capable of being used for “voice calls, video calls, YouTube, WhatsApp, email, texting, web browsing” and other applications.

In the bigger picture, internet service delivery from the stratosphere is an attractive proposition for IoT. At altitude, network coverage footprints can be more widespread, and coverage can be shifted as demand changes—a mining area moves, for example. In addition, there’s less ground-based infrastructure to build out or deal with; developers can avoid the hassle of private property easements required for laying cables, for example.

Service outages are conceivably more controllable, too. A provider could launch another device instead of having to trace faults through elaborate, remote, ground infrastructure. Backup balloons could be staged, waiting to be placed into service.

Another organization that’s exploring the atmospheric Internet is Softbank, which calls its 260-foot wide HAWK30 drones a “floating base station in the stratosphere.” (See related story: SoftBank plans drone-delivered IoT and internet by 2023)

One reason the major Japan telco is interested in stratosphere-delivered internet is because the archipelago is prone to natural disasters, such as earthquakes. Floating base stations above Earth can be more easily moved than traditional cell towers, enabling a quicker, more flexible response to natural disasters.

Westgarth said Loon’s balloons have come a long way since initial development. Launching is now performed by automated devices that can propel the ground-station-linked balloons to 60,000 feet once every half-hour, as opposed to by hand, as was done in earlier days.

Machine-learning algorithms handle navigation to attempt to provide sustained service to users. That’s not always possible, however, because wind (although not as excessive as can be found at ground level) and restricted airspace can affect coverage despite what Westgarth calls a “carefully choreographed and orchestrated balloon dance.”

Plus, the devices are solar powered, which means they only function and provide internet (or reposition themselves, or feed internet to other balloons) during daylight hours. For that and other reasons, Westgarth and Kibati have pointed out that the balloons must augment existing infrastructure and plans—they’re not a total solution.

“To connect all the people and things that are demanding it now and into the future, we need to expand our thinking; we need a new layer to the connectivity ecosystem,” Westgarth said.

Join the Network World communities on Facebook and LinkedIn to comment on topics that are top of mind.