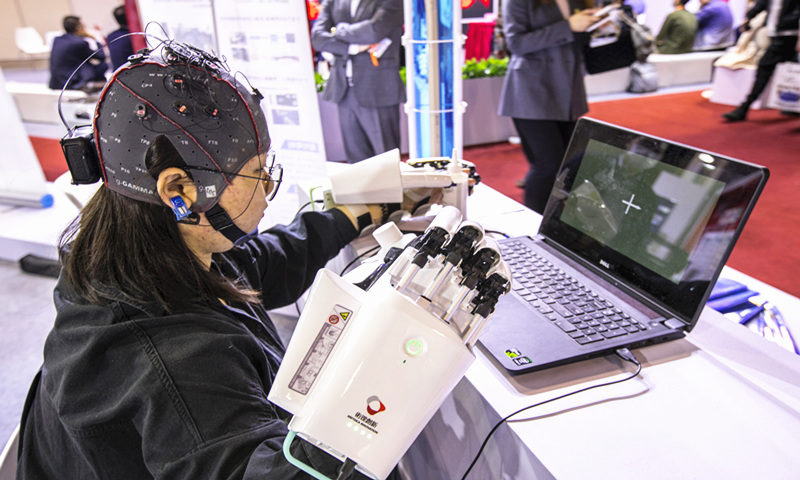 A Chinese start-up has started testing what it calls a “micro-invasive” brain-computer interface (BCI) in pigs, and monkeys are next, making the company one of China’s leaders in this emerging technology that has a wide range of application, the company told the Global Times.

BCI is a critical bioscience sector that could collect and analyze human brains’ electronic signals. “Micro-invasive” BCI technology is a hybrid between invasive BCI – which implants chips directly into the brain’s cerebrospinal fluid by surgery – and non-invasive BCI, which involves wearing a device that allows a user’s brain activity to be recorded.

Micro-invasive BCI involves placing a chip just behind the skull and above the cerebrospinal fluid, which ensures both safety and a longer effective period, Ke Youwang, the sales manager of Neuracle Technology Co, told the Global Times over the weekend.

“The chips used in invasive BCI could only function for about one to two years, and it’s extremely risky to re-implant after they are taken out. In contrast, the surgery for ‘micro-invasive’ BCI technology won’t cause major damage to the human body. The risks involved are comparable to implanting an artificial cochlea,” Ke said.

He added that as the electrical conductivity the human skull is poor, the signals sent by “micro-invasive” BCI are also clearer and stronger than non-invasive BCI.

Neuracle was founded in 2011 in Beijing and it opened a new subsidiary in Shanghai’s Pudong New Area in May, looking to take advantage of the area’s high-tech industrial chain and rich pool of talent to accelerate cooperation and technological development.

The company is working with medical and research institutions as well as universities to facilitate the experimentation and launch of the new technology, which is deemed a new track amid the hot global race for BCI, the next-generation biotechnology in industry, aerospace and medicine, with a target market valued into the trillions of dollars.

The US Industry and Security Bureau published a list of “emerging technologies” that are covered by export controls last year. BCI, along with other 13 technologies, was on the list.

China has been leading in the development of non-invasive BCI, while the US – represented by technology company Neuralink founded by Tesla CEO Elon Musk – has taken the lead in invasive BCI, according to industry observers.

In April, Fudan University revealed its first self-developed remote non-invasive BCI chip for animals, which it claimed is only half of the weight of similar foreign products.