The Health Ministry announced a new version of its contact tracing app on Monday, promising an array of new features, which it said would help boost its accuracy.

A key tool in containing the spread is epidemiological, or contact, tracing — investigations that seek to identify and send into self-quarantine all those who may have been exposed to patients in the days before they were diagnosed, hopefully cutting off the spread.

The first version of HaMagen (The Shield), which was released in March, worked by tracking its users via their phones’ built-in GPS, and correlating their location history (which was stored locally on the phone, rather than shared with the government, so as to alleviate privacy concerns) with the epidemiological data of known COVID-19 cases.

However, some users expressed skepticism regarding the app’s utility after receiving false positives and questioned the ministry’s claim that it would allow them to “stop the spread of the disease and protect those closest to us.”

One user told The Times of Israel that he had received false positives on four separate occasions.

In a video promo for the new version of the app, the ministry touted that it would help users “return to routine.”

According to the ministry, HaMagen 2.0’s use of Bluetooth allows phones with the app installed to identify each other, making them significantly less error-prone.

The new version will also allow users diagnosed with COVID-19 to voluntarily share their location data in order to aid the Health Ministry’s epidemiological investigations.

Calling for Israelis to download the app en masse, Health Ministry Yuli Edelstein touted its capabilities, stating that it would enable users to “safeguard their health, the health of their relatives, and the health of Israel’s citizens.”

Speaking with The Times of Israel in April on the original version, Health Ministry Chief Information Officer Rona Keiser acknowledged that GPS had its drawbacks, stating that the ministry was working on a new revision of the app incorporating Bluetooth technology.

An app using both GPS and Bluetooth would be “much more accurate,” she said.

The ministry’s more traditional contact tracing efforts have come under fire, with reports that its system for epidemiological investigation of those diagnosed has been far outpaced by the spread of the virus. 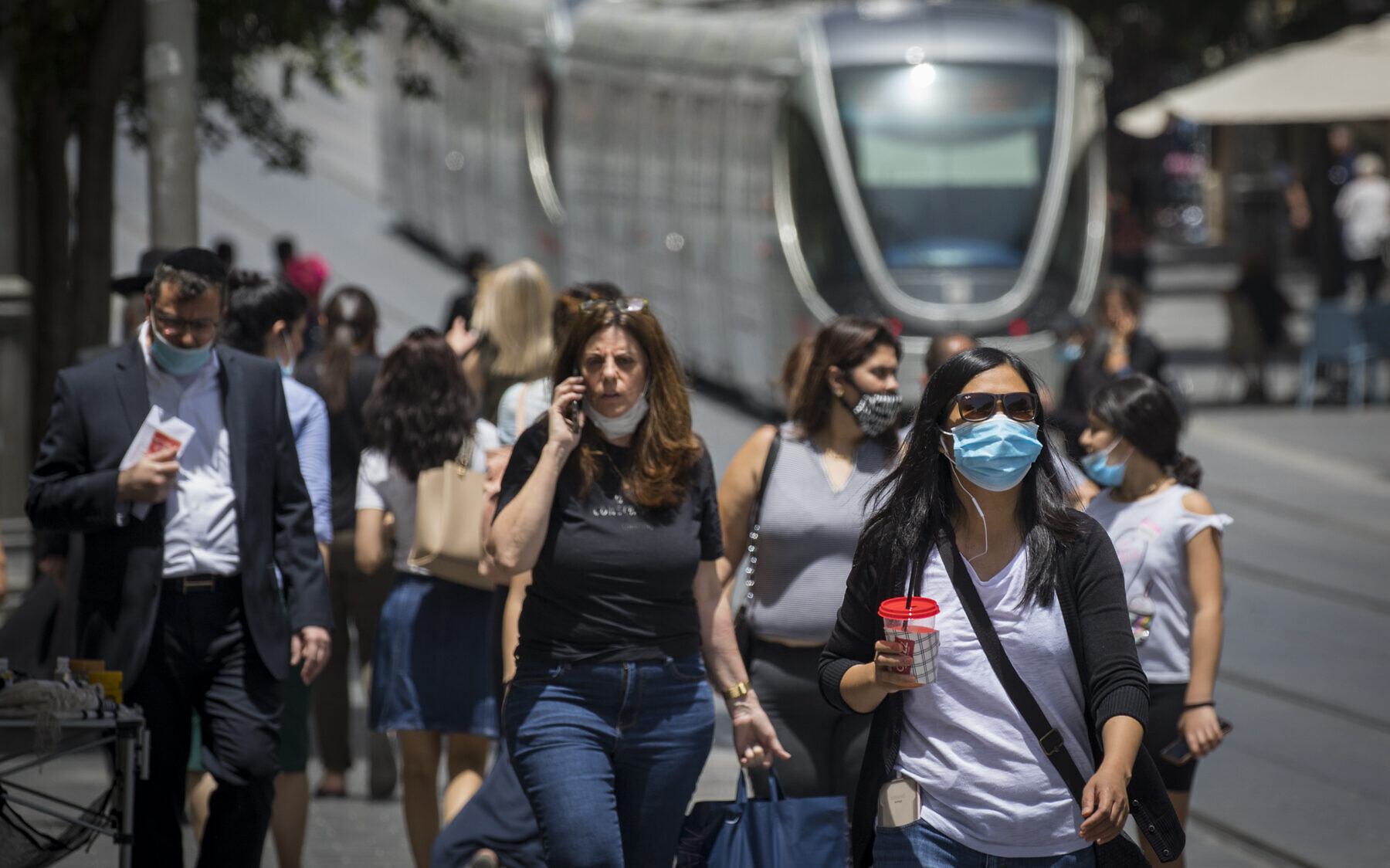 A woman uses a cellphone as people wear face masks to protect against coronavirus, in downtown Jerusalem, June 8, 2020. (Olivier Fitoussi/Flash90)

Faced with the difficulty of keeping up with contact tracing, the government recently reintroduced a controversial Shin Bet security service surveillance program that identifies those who may have been exposed to the virus by using digital means to retrace the movements of patients before they were diagnosed, primarily cellphone data.

Although the Shin Bet itself has said that it is reluctant to use the technology, which is usually reserved for combating terrorism, the government has insisted it is the only way to stay on top of the virus spread. The program was used during the initial virus outbreak but then halted for a short period.

Many Israelis have criticized the Shin Bet program, both due to civil rights concerns and because a growing number of people have said that they were being forced to stay home by mistake, likely due in part to technology that fails to discern whether two people were actually within six feet of each other, close enough to transmit the virus. Additionally, people said calls to the Health Ministry routinely go unanswered as officials say the system has been overwhelmed.

By contrast to the Shin Bet state surveillance of all Israeli citizens, the civilian HaMagen application is an opt-in program. 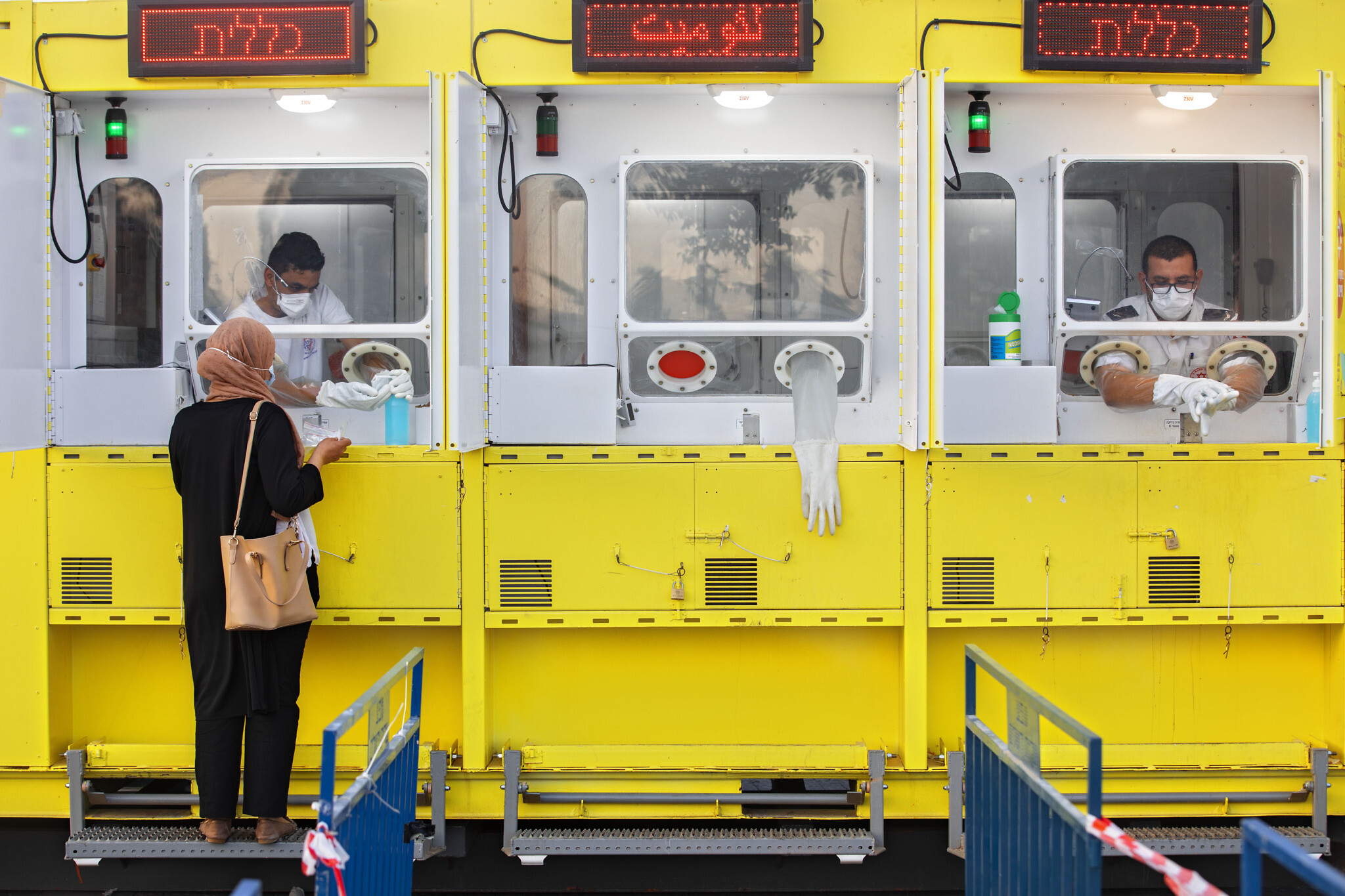 A woman is tested by a healthcare worker for the coronavirus at a mobile testing station, in east Jerusalem, July 21, 2020. (AP Photo/Oded Balilty)

On Friday, The New York Times ranked Israel sixth in the world in new daily cases per 1 million people, with a few under 200 a day at that ratio. The US was just above, at a little over 200 per 1 million, followed by South Africa, Panama, Bahrain and Oman, which led the pack with some 300 cases a day per 1 million residents.

According to the Health Ministry, Israel’s virus death toll rose to 474 on Monday. Since the start of the outbreak, there have been 63,985 cases of COVID-19, the disease caused by the coronavirus, diagnosed in the country, and 27,133 people have recovered.

Of the 36,278 active cases remaining, 311 have serious symptoms, and there were 95 people on ventilators, the ministry figures showed. Another 163 are displaying moderate symptoms, with the rest showing mild or no symptoms. The number of cases climbed by over 1,600 between Sunday night and Monday night.

Coronavirus wards at four of Israel’s largest hospitals are full, with a fifth nearing total capacity, according to the Health Ministry.