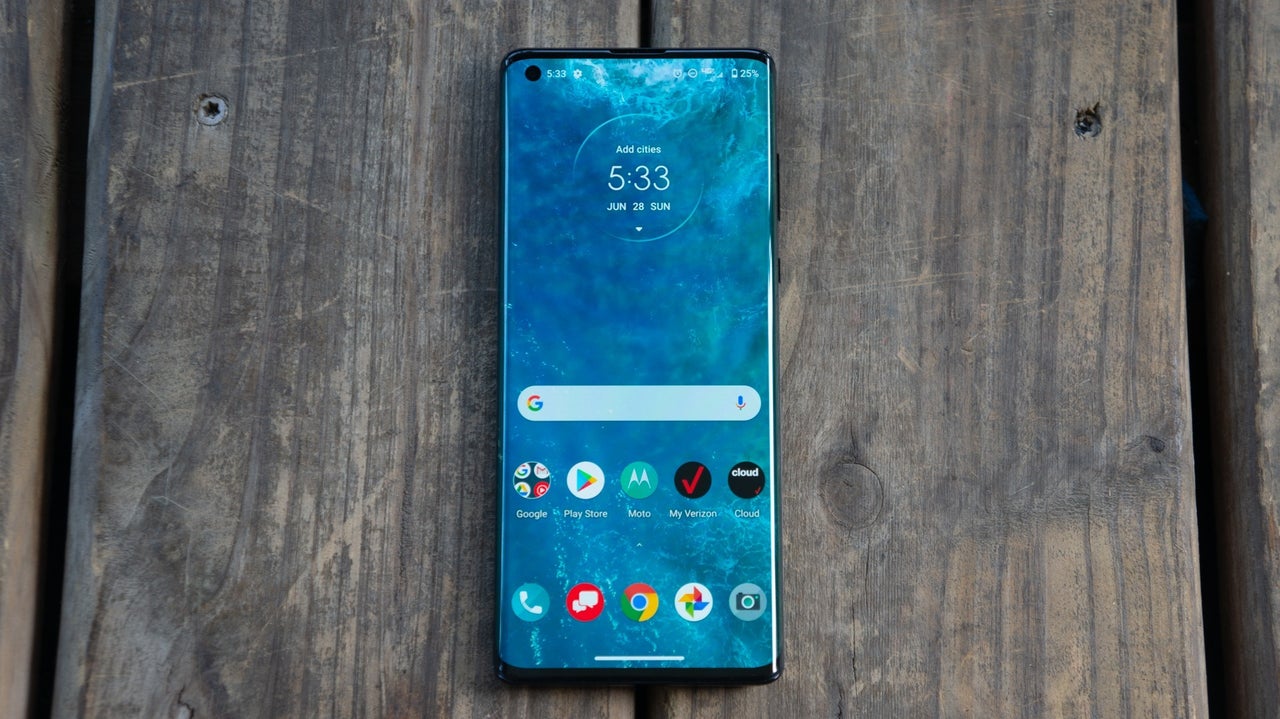 For a few years, Motorola’s Moto Z line may have been the company’s “flagship” smartphone offering, but it lagged behind the competition in design and specs while maintaining a lower price point. That all changes with the new Motorola Edge+, which sees the company go all in on specs, features, design, the latest 5G goodness, and the $1,000 price tag that’s so hot right now. Let’s see how Motorola’s latest attempt at flagship quality holds up.

The Motorola Edge+ has been freed from the shackles of the Moto Z family, no longer having to conform to strict shape and size guidelines to continue supporting Motorola’s fleet of Moto Mod attachments. The result is a phone that looks a lot more like the premium handsets that surround it in the market, with some similarity to Samsung’s previous generation of Galaxy S phones before Samsung brought back flat screens with the Galaxy S20 family.

You’ll find Gorilla Glass 5 on both sides of the phone sandwiching a 6000-Series aluminum frame. The glass of the display also wraps around the sides of the chassis, leaving minimal bezels at the top and bottom. Motorola delivers a punch-hole camera in the top-left corner instead of relying on a notch like Apple’s iPhone 11 Pro or LG’s flagships. Motorola also notes a “Water repellant design” that falls short of the more rigorous IP68 ratings found on many other flagship phones.

The Motorola Edge+ has a large footprint at 161.1mm x 71.38mm x 9.6mm and 203 grams, which lets it fit in a 6.7-inch OLED display and a 5,000mAh battery. In terms of size, it would compare closer to the Samsung Galaxy S20 Ultra or S20+ than it would to the Galaxy S20. It’s not just glass that wraps around the sides either, but actually an active display area as well, making for an effect that can look cool in some situations or just wonky as visuals warp around the edge.

The display itself is a sharp enough 2,340 x 1,080 and boasts a 90Hz refresh rate for a smoother feel. The display is impressively bright, offering easier readability in direct sunlight next to the Galaxy S20 at max brightness. It also supports HDR10+. And, if you need to connect to another display, the UBS-C port supports DisplayPort.

The design of the Motorola Edge+ has many aspects that reflect the current flagship landscape, including a fingerprint sensor built into the display, a slim earpiece speaker for fairly robust stereo sound, and support for wireless charging (and reverse wireless charging). It bucks one industry trend by including a 3.5mm headphone jack, albeit without any of the fancy DAC enhancements LG offers.

Motorola has also gone all in on modern internals. You’ll find the necessary components to get 5G (both mmWave and Sub-6GHz), as well as support for Wi-Fi 6, Bluetooth 5.1, and NFC. You won’t miss out on much in terms of connectivity here except for the fact that Verizon’s current 5G rollout is incredibly limited, meaning very few people will be able to take advantage of the Motorola Edge+’s 5G connectivity within the US for some time.

While the Motorola Edge+ design feels solid overall, there are a few points where it could be improved. A few issues stem from the way the glass and metal all fit together. There’s a considerable gap between the display and frame, which allows for debris to get lodged, and it also makes for wobbly side buttons that don’t inspire confidence. The phone is a bit slippery as well.

The Motorola Edge+ comes running on Android 10 out of the box and is mostly free of bloatware despite its close ties with Verizon. There will be a few Verizon apps and games pre-installed, but it will otherwise run Google apps as its defaults and feature just a few of Motorola’s enhancements, such as the ever-handy Moto Actions (which offer two of the easiest ways to launch the camera app or toggle on the flashlight with simple hand movements).

This time around, Motorola also has baked in some software to make use of the display’s edges. This includes setting it to light up for notifications, a game mode that adds shoulder buttons to the edge, a floating toolbar that lives on the edge, and a button that can stop some apps from extending over the edge so that you can more easily see all the content (which shows Motorola knows the edge isn’t always as practical as it is nifty).

Thanks to Motorola’s inclusion of the top-notch Snapdragon 865 chipset with 12GB LPDDR5, the Motorola Edge+ is a performance powerhouse. The octa-core processor paired with a 90Hz display makes it that much easier to feel just how smoothly this phone operates. In side-by-side Geekbench 5 tests, it outperformed the Samsung Galaxy S20 with a 909 single-core score and a 3340 multi-core score to the Galaxy’s 903 and 3140, respectively.

Launching and switching between apps is a breeze, and the phone easily runs graphically intensive games like Asphalt 9. Even the camera launches quickly, making it that much easier to snap a photo in the moment. Scrolling around and zooming in on 108MP photos is also fluid and responsive.

Some of that speed may come down the Motorola Edge+’s 256GB of UFS 3.0 storage. Launching Asphalt 9, the game was running and ready to play in less than 10 seconds.

The battery performance was also satisfactory – 5,000mAh is a lot to work with. Even with such a large and bright display, the Motorola Edge+ can handle running all day on its beefy battery. However, it’s worth noting that I was running on 4G LTE throughout my testing, and using Verizon’s 5G mmWave network has been more power intensive in my experience. The 5G modem that’s paired with the Snapdragon 865 chipset may be more efficient than the one found in Motorola’s 5G Moto Mod, though.

The cameras on the Motorola Edge+ are a notable feature. The old, circular camera bump found on so many Motorola phones is gone. In its place, you’ll find a serious array of cameras. Here are the key specs:

This array of cameras isn’t just competent but also commendable. The main sensor is capable of snapping some stunningly sharp photos that look absolutely great. Neither the wide-angle nor zoom cameras disappoint by shifting too far away from the look of the main sensor either, making for a consistent shooting experience. The wide-angle camera also performs double duty as a macro camera that can snap incredibly detailed photos from about an inch away. The result is a photo that shows more than I can see with my own eyes.

The telephoto lens offers up a 3X optical zoom which helps get a closer look at far off subjects, but it doesn’t compare to the zoom offered by Samsung’s Galaxy S20 family, as increasing to a 10X digital zoom shows the Motorola Edge+ struggling to resolve some of the detail that Samsung manages to piece together. Neither phone really offers a good photo at that level of zoom, but at least the Samsung version is a bit less hazy.

The only drawback I noticed from the rear cameras was how they handled color. For the most part, they seemed to do a solid job offering natural color and decent HDR performance. But, on one occasion I went out shooting in the wake of a thunderstorm, and the cameras simply couldn’t reckon with the wild, orange sky. The resulting photos were left with a much more mundane gray sky and even the double rainbow lost a bit of its vibrance. In low-light the cameras still take decent shots, but not nearly as readily as in bright conditions.

Flipping around to the front-facing camera, the Motorola Edge+ sticks the landing again. This 25MP shooter will bin the photo down to 8MP by default, but with either resolution setting the result is a crisp shot – the kind that leaves you feeling like you might want to wash your face more often. The front camera also has up to a 240fps slow motion mode that can let you see just how wiggly your nose is after it’s been flicked.

The video capabilities are simple, but clean. There’s no fancy HDR10+ recording here nor 4K/60fps, but the camera will let you go up to 6K/30fps with a fairly wide field of view. The video stabilization also keeps even intentionally jarring hand motions from ruining shots, so you’ll need to turn that off if you want to recreate Cloverfield. For full use of the different sensors in video mode, you’ll have to dial it down to 1080p/30fps. It all makes for a simpler, and easier to use camera system than those found on Samsung and LG flagships, but it’s also less rich in extra features.

The Motorola Edge+ is available exclusively from Verizon for $999.